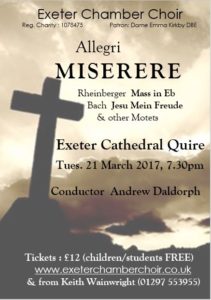 We look forward to returning to the stunning acoustics and the contemplative settings of Exeter Cathedral Quire and Buckfast Abbey for our two Lenten concerts this season. The music will include Allegri’s famous “Miserere”, a nine part setting of Psalm 51 for Matins in Holy Week, as well as Bach’s motet, “Jesu Meine Freude” and the Mass in Eb by German romantic composer, Josef Rheinberger.

Gregorio Allegri’s Renaissance masterpiece “Miserere mei Deus”, was composed for the celebration of matins during Holy Week in 1638. It was strictly guarded by the Sistine Chapel until 1771, when it was published in London, by Dr Charles Burney, just after the 12 year old Mozart had heard the work during his European tour (Easter 1770) and made his own famous transcription.

Meanwhile, J.S. Bach composed his motet “Jesu Meine Freude” in 1723, during his first year at St. Thomas Church, Leipzig. With 11 movements, it is the longest of his 6 motets and the most musically complex.  Bach was to be perhaps the greatest influence on the compositional style of Josef Rheinberger, who was prolific and wrote 12 masses. His “Cantus missae” Mass in Eb (1878) was the only one for double choir, however, and it has been described as the “most beautiful, pure vocal music of the 19th century”.